Britney Spears has offered her estranged sister Jamie Lynn Spears some rare praise despite previously calling her ‘scum’ and accusing her of ‘f***ing lying’ in her controversial memoir released earlier this year.

In an Instagram post shared Friday, the singer – who is celebrating her 41st birthday – congratulated her ‘brave’ and ‘inspiring’ little sister, 31, for baring her soul in a promo clip for her Fox’s Special Forces, a military-style competition show for celebrities.

‘It’s my b-day but you’re my heart so I’m thinking about you … congratulations on being so brave, inspiring, and showing guts and glory in your show !!!’ Britney began. 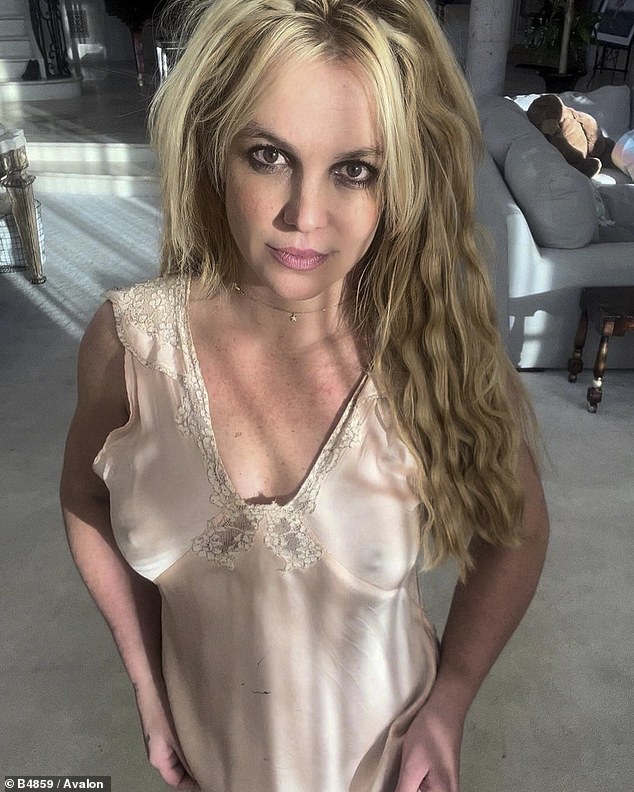 Rare: Britney Spears has offered her estranged sister Jamie Lynn Spears some rare praise despite previously calling her ‘scum’ and accusing her of ‘f***ing lying’ in her controversial memoir released earlier this year; Britney seen in November

She then appeared to reply to Jamie Lynn’s quote about wanting to feel ‘worth something’ and escape her sister’s shadow by ‘proving herself’ on the cut-throat program, which will premiere January 4, 2023.

‘You ain’t alone … if anybody knows what that feels like … I get it’ wrote Britney, who was clearly alluding to her now-terminated conservatorship. 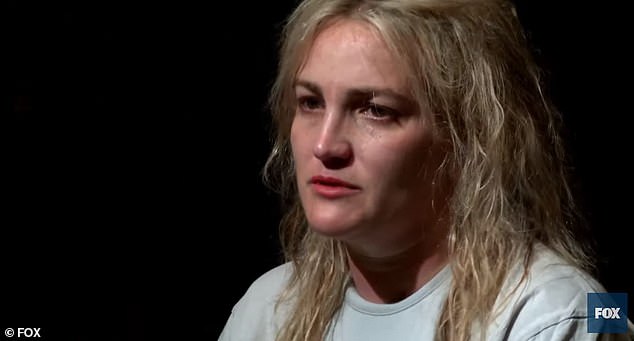 Raw and real: In an Instagram post shared Friday, the singer – who is celebrating her 41st birthday – congratulated her ‘brave’ and ‘inspiring’ little sister, 31, for baring her soul in a promo clip for her Fox’s Special Forces, a military-style competition show for celebrities 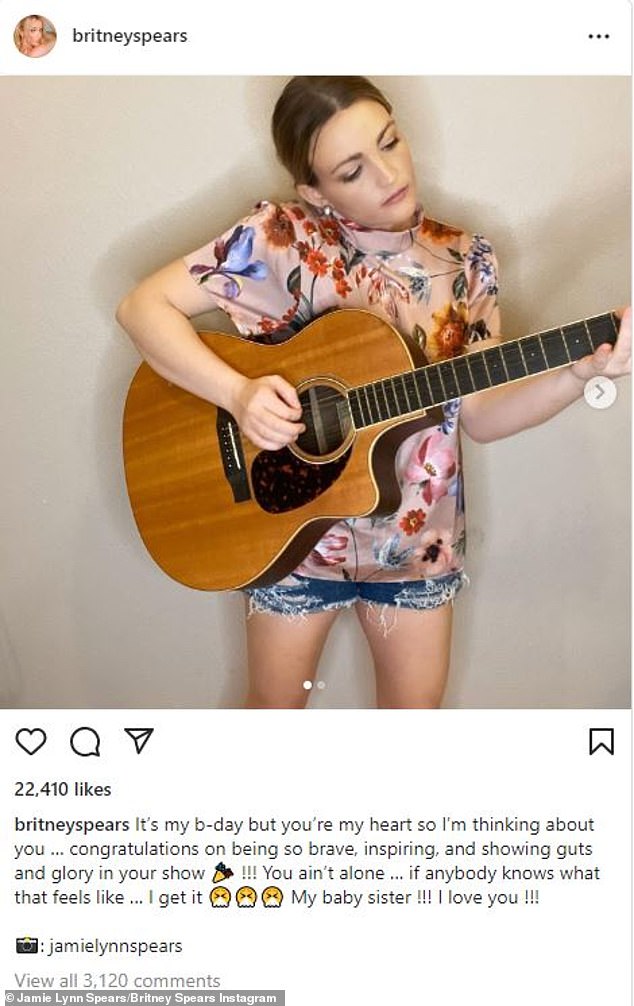 ‘It’s my b-day but you’re my heart so I’m thinking about you … congratulations on being so brave, inspiring, and showing guts and glory in your show !!!’ Britney bega

Confused: Fans expressed their confusion over Britney’s post, with one user saying the singer was simply throwing shade at her younger sister

Explaining: Another user wrote that she was just ‘being sarcastic’ because ‘Jamie Lynn always wants to make things about herself’

Social media users and followers quickly jumped to the comment section to express their utter confusion in regards to Britney’s post.

One wrote that the post, ‘has to be shade,’ while another stated, ‘The math ain’t mathing Brit.’

Others typed that they believed she was not in control of her own Instagram account, with one follower stating, ‘Her man has her account now. He’s part of the plan. I’m convinced dad hired him. I said what I said.’ Another jokingly wrote, ‘Jamie Lynn get off Britney’s ig,’ followed by a laughing emoji.

‘Someone stole her account,’ a user expressed, with another follower penning, ‘Y’all she’s being sarcastic because Jamie Lynn always wants to make things about herself.’

Another appeared to be completely surprised by the post, writing, ‘Oh y’all friends again?’ 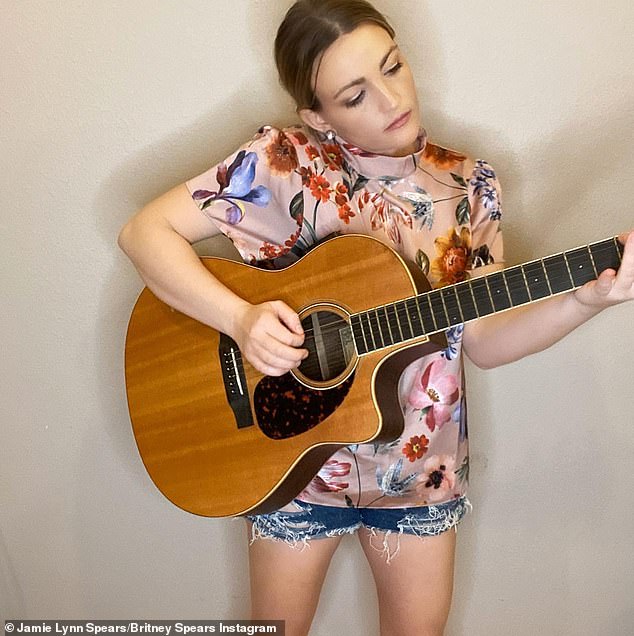 Snaps: Along with her heartfelt message, Britney included two photos of Jamie Lynn strumming a guitar and posing on a bar stool

Responses: Another jokingly typed out, ‘Jamie Lynn get off Britney’s ig,’ hinting that the singer’s younger sister had uploaded the post

Other users showed their support for Britney and Jamie’s relationship, writing, ‘Y’all should be excited for her to have a relationship with her sister. If that’s what they both want, and they’ve reconciled that’s a beautiful gift and blessing.’

Fans continued to scratch their head as the Louisiana native returned to the platform to post a topless selfie.

She lifted up her bust with her hands, but covered her nipples with a set of flower emojis, as she relaxed on the sand at a tropical destination.

Britney has publicly feuded with Jamie Lynn since speaking out about her alleged treatment while under her nearly 14-year conservatorship. This contention resulted in Britney not inviting her ‘baby sister’ to her wedding to actor Sam Asghari, 28, in June.

Earlier this year in January, the Baby One More Time hitmaker called her younger sister ‘scum’ after the former Nickelodeon star published the controversial memoir titled, Things I Should Have Said.

Showing support: One user showed her support for Britney and Jamie’s relationship, typing that she hoped they had ‘reconciled’ 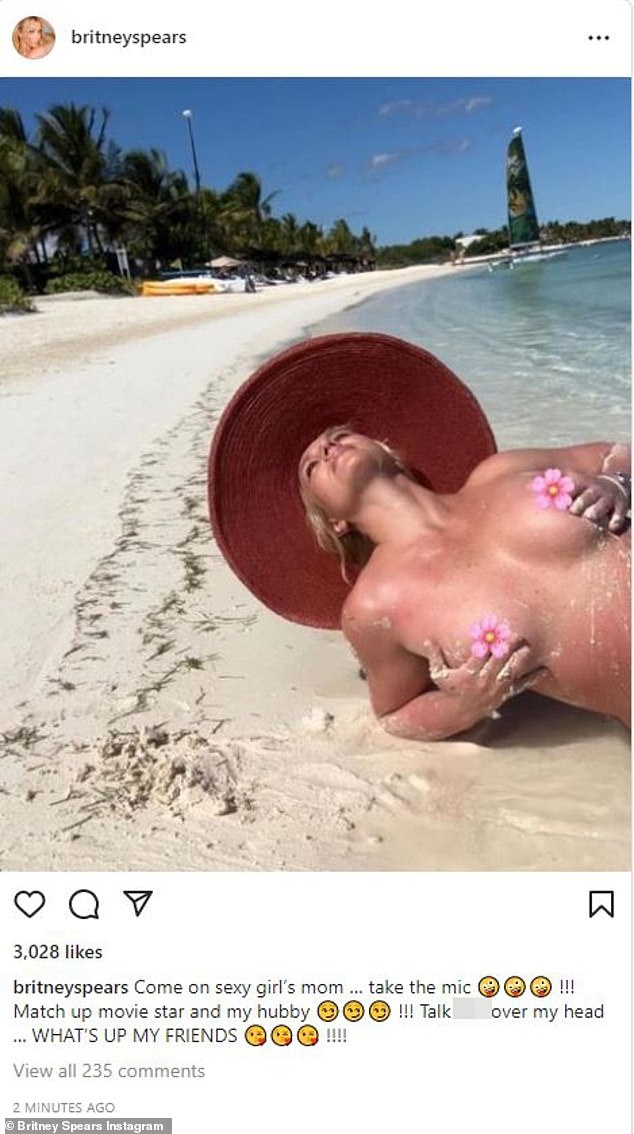 Recent posts: Following the post praising her younger sister, Britney also uploaded a topless snap of herself posing on a sandy beach

Not buying it: Shortly after the post was published, fans of the Toxic singer expressed confusion in the comment section — even speculating that Britney may no longer be in control of her Instagram account 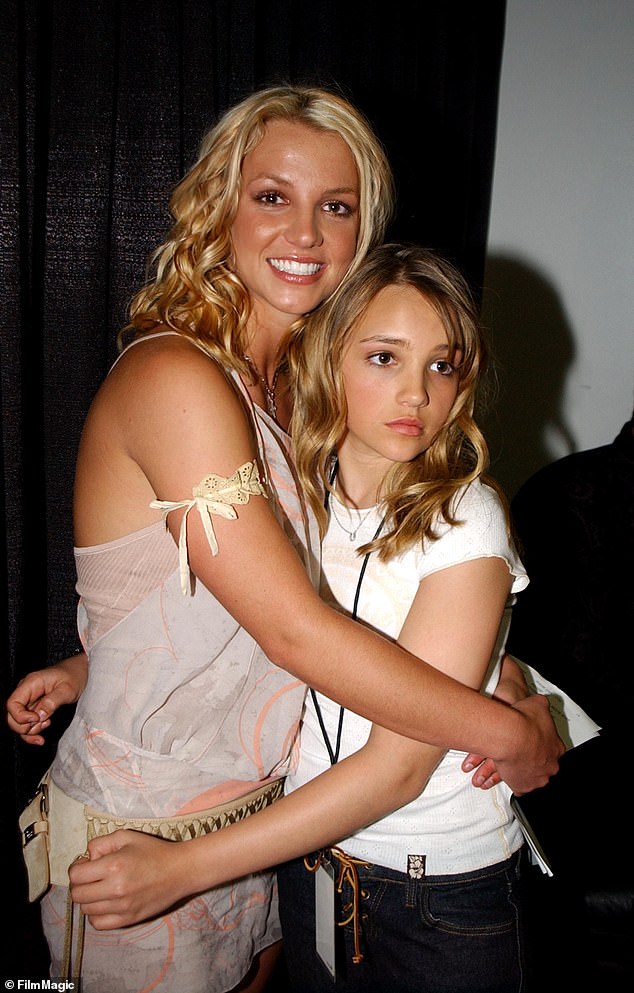 Using her Instagram caption to air her grievances, the entertainer said, ‘The timing of your book was unbelievable Jamie Lynn.’

She also reiterated that despite her family’s claims that they were unaware, her ‘whole family’ knew about the abuse of her former conservatorship. Sarcastically, she went on to say, ‘Congrats best seller … I’m not surprised at all.’

‘The nerve of you to sell a book now and talk s–t but your [sic] f—ing lying just like you lied about Alexa Nikolas !!!!’ The Slave 4 U performer was referencing her sister’s former Zoey 101 costar who accused Jamie of ‘lying up a storm’ about her in the written work.

As she continued to slam her sibling Britney said that she wished she ‘would take a lie detector test.’ Britney capped off the caption as she wrote, ‘You are scum, Jamie Lynn.’

The performer notably doesn’t follow Jamie on Instagram, and has also accused her younger sibling of not supporting or being there for her during the conservatorship. 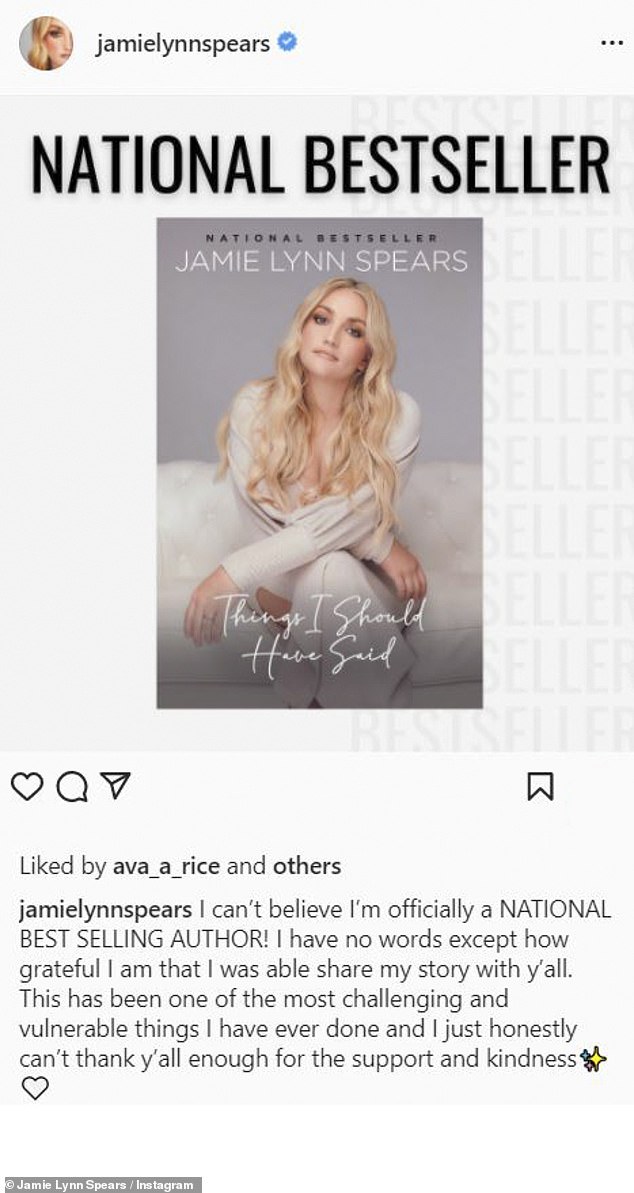 Past feuds: After Jamie published her memoir, Britney slammed her sister and called her ‘scum’ on social media 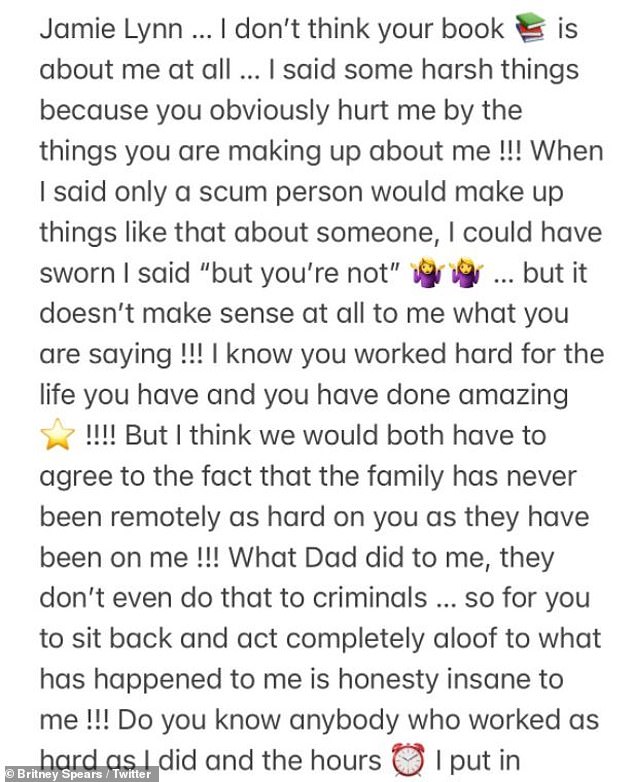 Feeling hurt: Britney explained in a separate post that she felt ‘hurt’ and claimed her sister had acted ‘aloof to what has happened to me’

In a Twitter post after calling her sister scum, Britney explained that she had felt hurt at the time, but also added that her sister hadn’t been there for her.

‘I think we both have to agree to the fact that the family has never been remotely as hard on you as they have been on me!!! What Dad did to me, they don’t even do that to criminals…’

She continued, ‘So for you to sit back and act completely aloof to what has happened to me is honestly insane to me!!!’

Jamie soon gave her own response to her older sister on Instagram, asking Britney to ‘call’ her to keep the issue private. ‘But you still choose to do everything in a public platform.’

The Zoey 101 star also defended herself, writing, ‘Please stop continuing the narrative that I haven’t been there for you or that I’m making things up,’  adding at the end, ‘This is embarrassing and has to stop. love you.’ 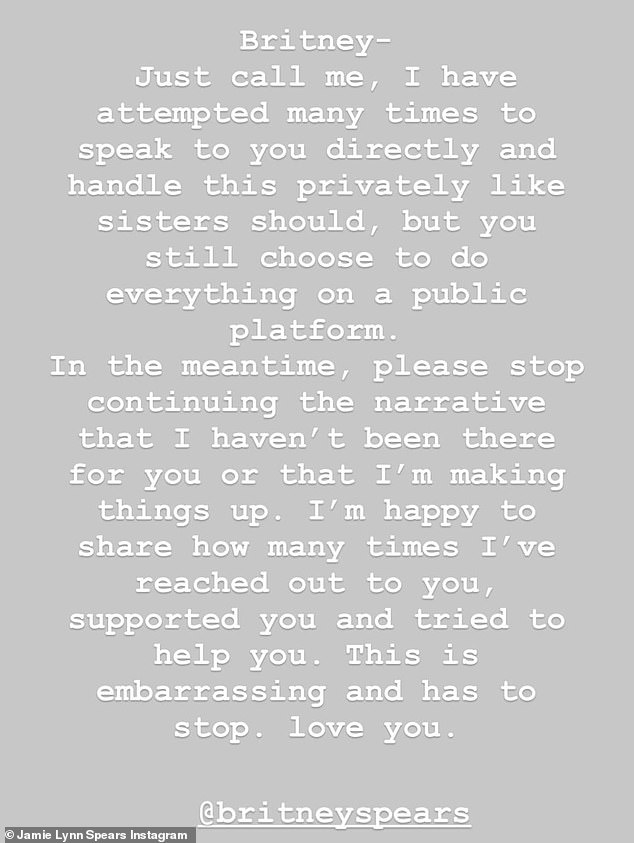 Reaching out: After Britney’s claims, Jamie jumped to her own Instagram story and asked the star to call her and additionally defended herself on the platform 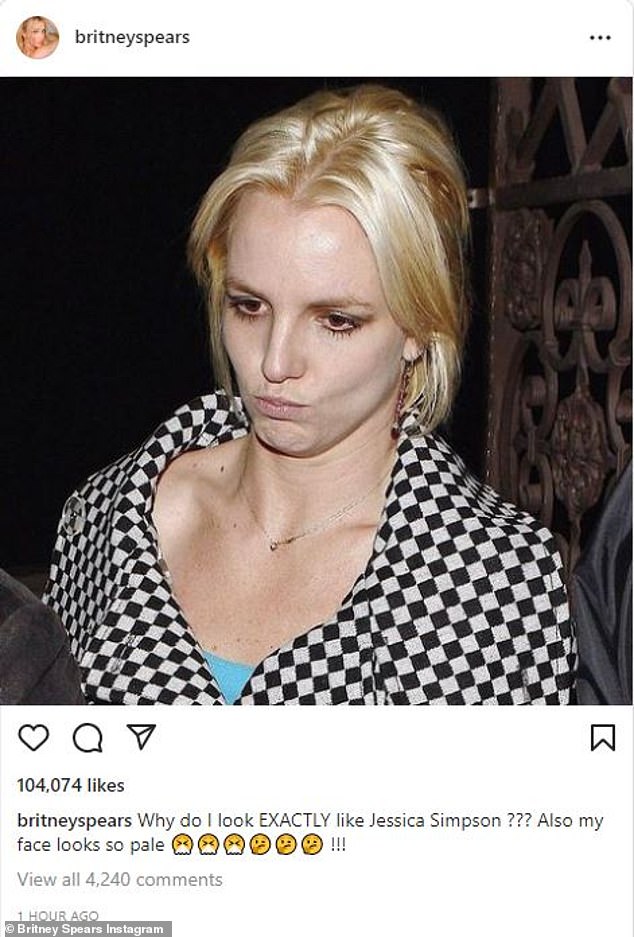 Other posts: Also on Friday, Britney shared a snap of herself in an additional post where she questioned why she looked like Jessica Simpson 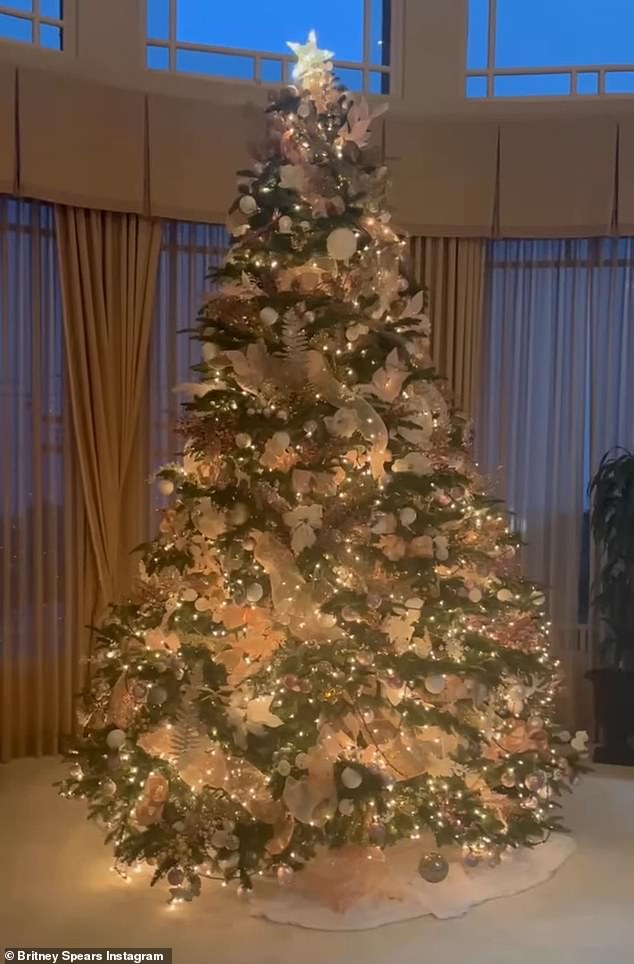 On Friday, the singer also uploaded a post where she compared herself to Jessica Simpson, typing, ‘Why do I look EXACTLY like Jessica Simpson ??? Also my face looks so pale.’

Britney shared numerous other posts in celebration of her birthday, including uploading a quick reel to give a glimpse of her decorated Christmas tree.

She had written in the post, ‘My beautiful Christmas tree!!! It’s way better than last year’s tree!!!’ However, fans immediately pointed out that something was off, explaining that the video appeared to have been taken at her old house.

After fans demanded in the comments that she do a live video to see if she was okay, the star uploaded a clip of her husband, Sam Asghari, singing her happy birthday. 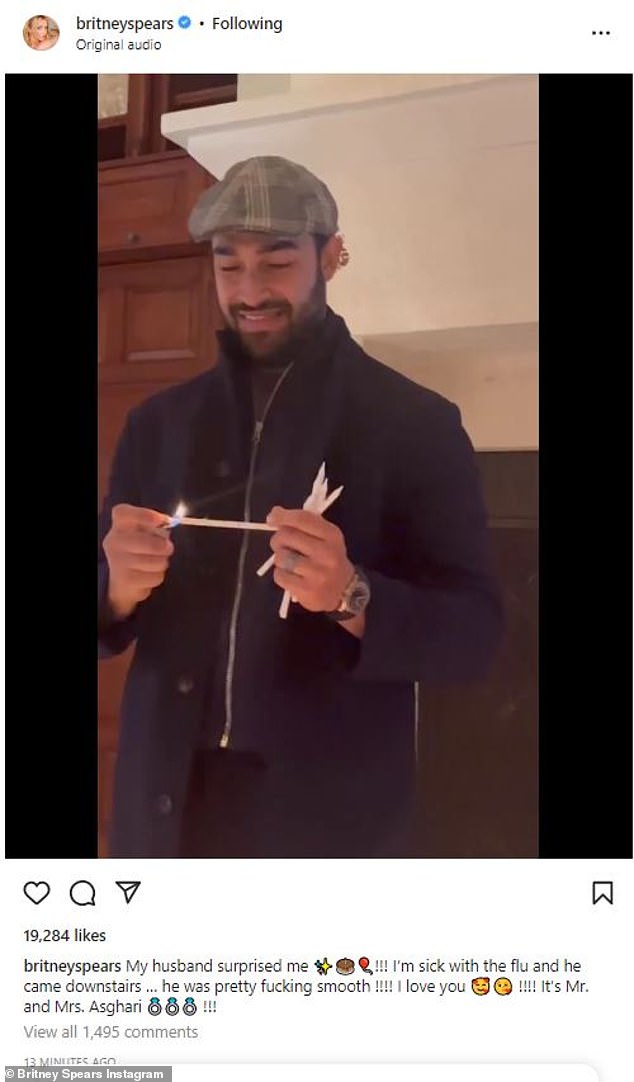 Special day: In the caption, Britney explained that she was sick but that her husband still surprised her with birthday treats and goodies

The video showed a cake with a number one candle lit on top, along with red rose petals, tealight candles placed in the shape of a heart, and other pink flowers surrounding the tasty dessert.

Pink birthday balloons were also next to the table while the actor continued to light more candles.

Another pink decorated cake could be seen on the table with what appears to be a champagne bottle placed in the middle. 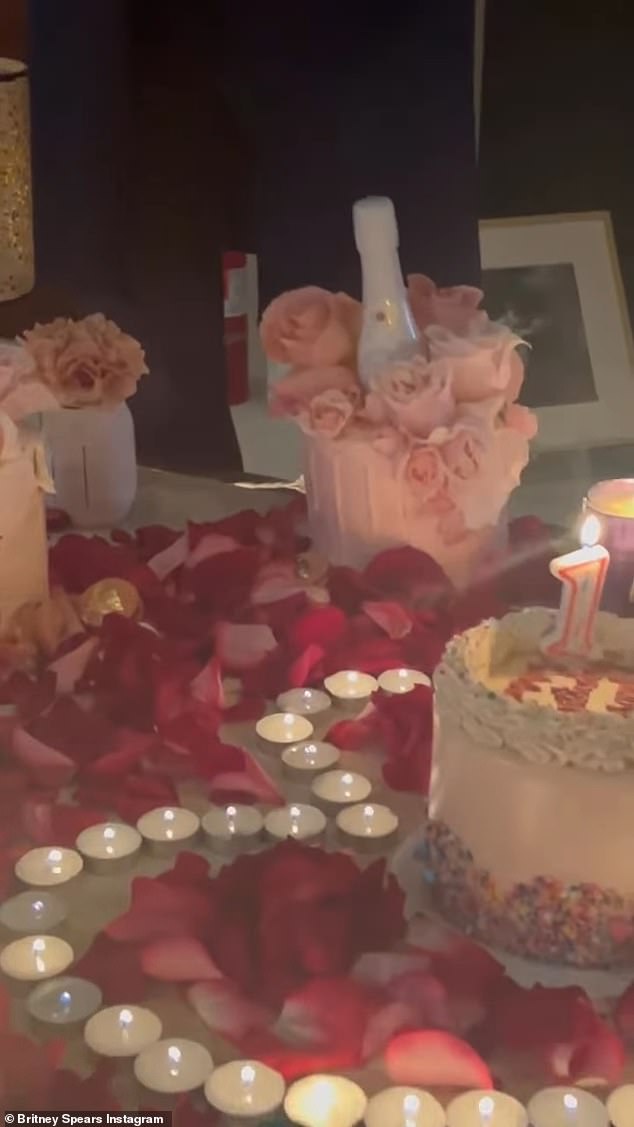 Cute: The main cake was surrounded by red rose petals, tealight candles in the shape of a heart, and other pink flowers in a vase 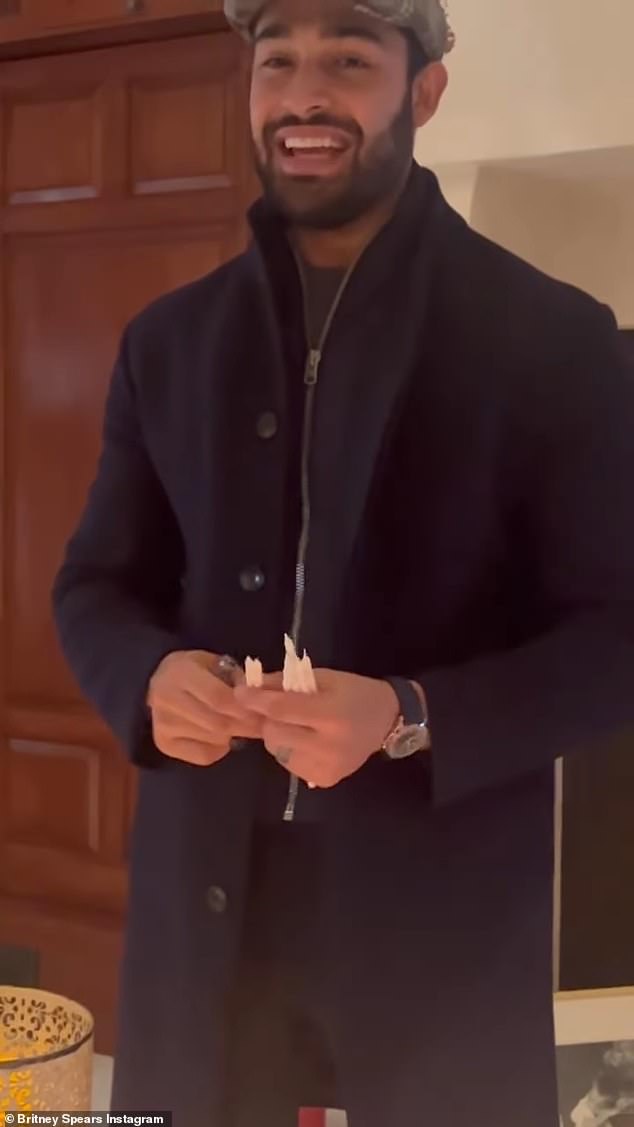 Lighting candles: As he wished his wife happy birthday, he also could be seen lighting more candles to put on the cake