The tournament of shocks delivered again as Cameroon left it late to secure a famous win over the World Cup favourites, who are still without Neymar.

Not even Brazil are safe in this tournament of upsets.

After Argentina, Germany, Belgium, France and Spain came this latest shock. It didn’t cost the Selecao too much, but this 1-0 defeat to Cameroon provided another memorable World Cup moment, and raises questions as to whether Tite’s side really should be considered favourites.

Vincent Aboubakar’s 92nd-minute header secured victory for Cameroon, though it was not enough to secure them qualification to the last 16 due to Switzerland’s win over Serbia. Still, this was a famous win for the Indomitable Lions, one to go alongside their famous humbling of Argentina in 1990.

Brazil, in fairness, were already sure of qualification – they will face South Korea in the last 16 – and so made nine changes to their starting line-up. But they lost another player, Alex Telles, to injury and coach Tite is still waiting for his vaunted array of attackers to fire.

Gabriel Martinelli, the Arsenal forward, was the best on show here, but Brazil wasted a host of chances before being caught by Aboubakar’s late sucker punch.

Here, GOAL runs through the winners and losers in Doha… 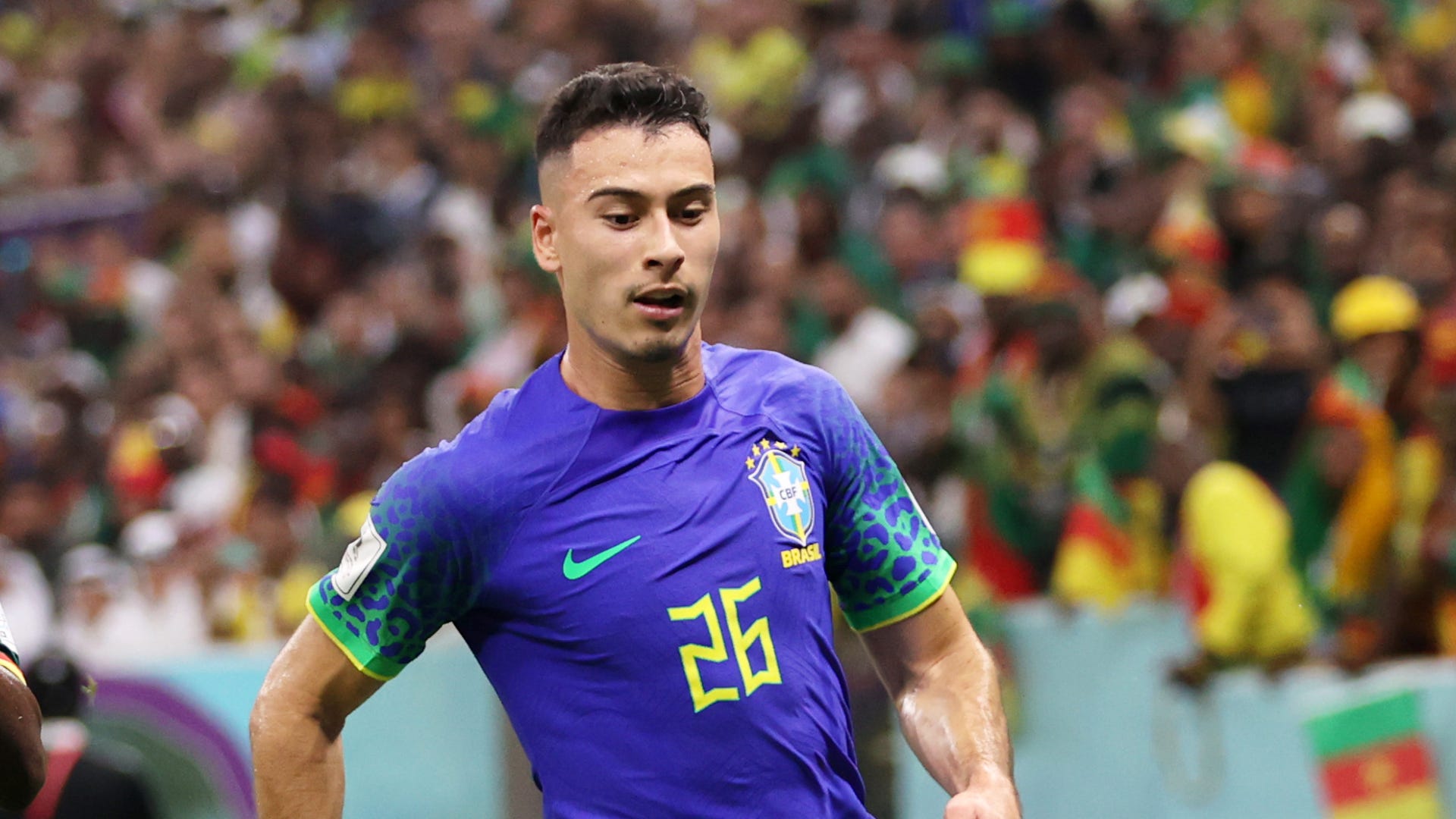 GettyThe WinnersGabriel Martinelli:Jurgen Klopp once called Martinelli ‘the talent of the century’, and it looks like this will be the year we all understand what he meant.The Arsenal man was one of nine players drafted into Tite’s starting XI, with qualification for the last 16 already taken care of. And while some – his Gunners teammate Gabriel Jesus, for example – did little to boost their chances of further involvement, Martinelli played like a man determined to give his manager food for thought.He’s so direct, so positive, and his speed and control made him a nightmare for Collins Fai, the Cameroon right-back, who could do little about his forward raids down the left.Three times, he forced saves from goalkeeper Devis Epassy, and time and again he carried the ball into dangerous areas, never disheartened when things didn’t fall his way.With Vinicius Junior firmly established as Tite’s first-choice on the left, he’ll do well to get another start in this tournament, but don’t be surprised if he makes a huge impact off the bench at some point. This is a player who, as Klopp predicted, is going right to the top.Dani Alves:The future may be bright, but there’s always space for a bit of nostalgia at a World Cup, and it came here in the form of the greatest right-back of the modern era.At 39 years and 210 days, Alves became the oldest player ever to feature in a World Cup game for Brazil. This was his 125th cap, his debut having come in 2006, and a reminder to everyone that there really is no substitute for experience, professionalism and commitment when it comes to top-level football.He isn’t, of course, the marauding presence of Sevilla or Barcelona – he plays his football in Mexico these days, and hasn’t played too much of it due to injury of late – but full credit to him for still being capable of performing at this level.What a career he’s had, and it may yet have a golden finale too.Vincent Aboubakar:Well, at least you can say he left the World Cup in memorable fashion.What a header the Cameroon captain produced to win this game in the second minute of added time. Aboubakar, who had already provided one of the moments of the tournament with his scooped finish against Serbia, timed his run perfectly to meet Jerome Ngom Mbekeli’s delicious right-wing cross, leaving Ederson rooted to the spot as his effort flew into the bottom corner.It was a goal worthy of winning any game, and one which secured a famous, if ultimately fruitless, victory for Cameroon. Aboubakar removed his shirt in celebration, earning a second yellow card in the process. A bit daft, but it won’t cost him too much as it turns out, as Switzerland’s win over Serbia ensured it is they, rather than the Indomitable Lions, who progress to the knockout stage. 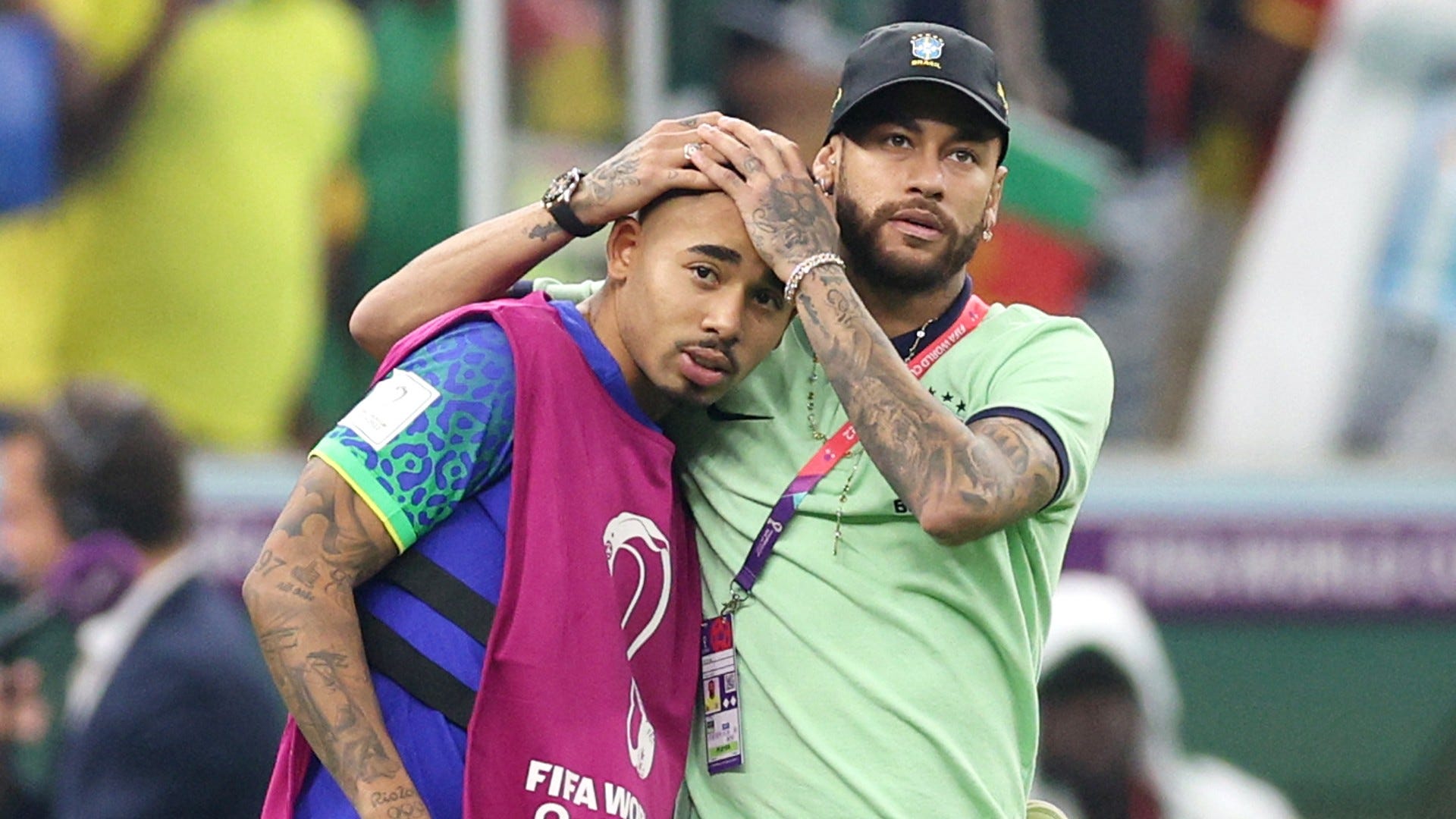 GettyThe LosersAlex Telles:The tears of a man who knows his World Cup is over? It certainly looked like it.After Neymar and Danilo, Brazil have another injury to deal with after Telles, their back-up left-back, was forced from the field early in the second half here.The 29-year-old suffered the problem in a mid-air collision while defending a corner, and having initially tried to play on, was in obvious distress as he was forced to admit defeat.This was his first start of the tournament, having begun it as understudy to Alex Sandro. It would be a surprise if we saw him again. His face said it all here.Gabriel Jesus:Jesus’ face said it all as he made his way to the sideline. An opportunity missed, for sure.There has been much debate as to who should be Brazil’s No.9, but Richarlison can sleep easy tonight after the Arsenal man failed to seize his big chance.Jesus, who is still without a goal in seven World Cup appearances, was not especially poor, he just didn’t really influence proceedings. He always works and his movement is always sharp, but Brazil’s threat came via their wingers, leaving their centre-forward cutting a frustrated figure throughout a goalless first half.His number went up early in the second, and there was a rueful look as he was replaced by Pedro, a 25-year-old who plays his club football with Flamengo. Having waited for his opportunity, Jesus will wish he did more with it.Cameroon:You had to feel for Rigobert Song and his players. Having given so much, and pulled off a famous victory, they left the Lusail Iconic Stadium dejected, their World Cup dreams dashed for another four years.They left their mark on this tournament of course. Their fightback against Serbia was thrilling, and they competed superbly here against the No.1 ranked team in the world.But their slow start has ultimately cost them. Their passiveness in defeat to Switzerland was hard to explain, and it is that which has led to their elimination. No wonder they looked so devastated at the final whistle here. 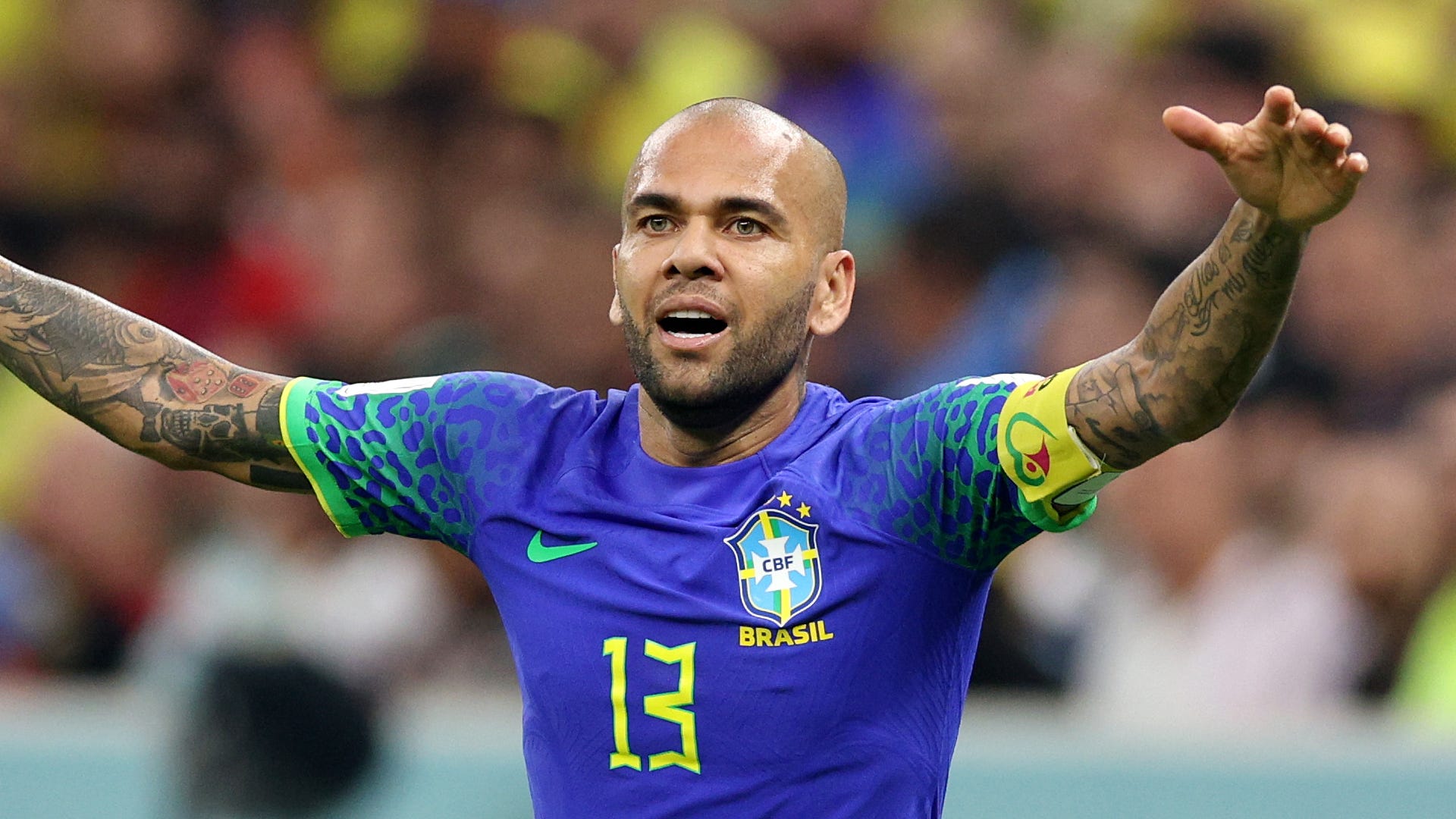 GettyBrazil Ratings: DefenceEderson (6/10):Alert in the first half to push away Mbeumo’s header, and fielded Ntcham’s long-range strike well after the break. Helpless to stop Aboubakar’s winner. Distribution high-class, as ever.Dani Alves (6/10):Minimal fuss from the 39-year-old, who had more touches and contested more duels than anyone else on the field.Eder Militao (7/10):Looks a class act whether at right-back or centre-back. Pace and strength, and almost made the breakthrough from a set-piece.Gleison Bremer (6/10):Excellent in possession and positionally excellent until undone by a superb cross in stoppage time.Alex Telles (6/10):Caught under the ball for Mbeumo’s chance. Otherwise assured before suffering an injury early in the second half which forced him off in tears. 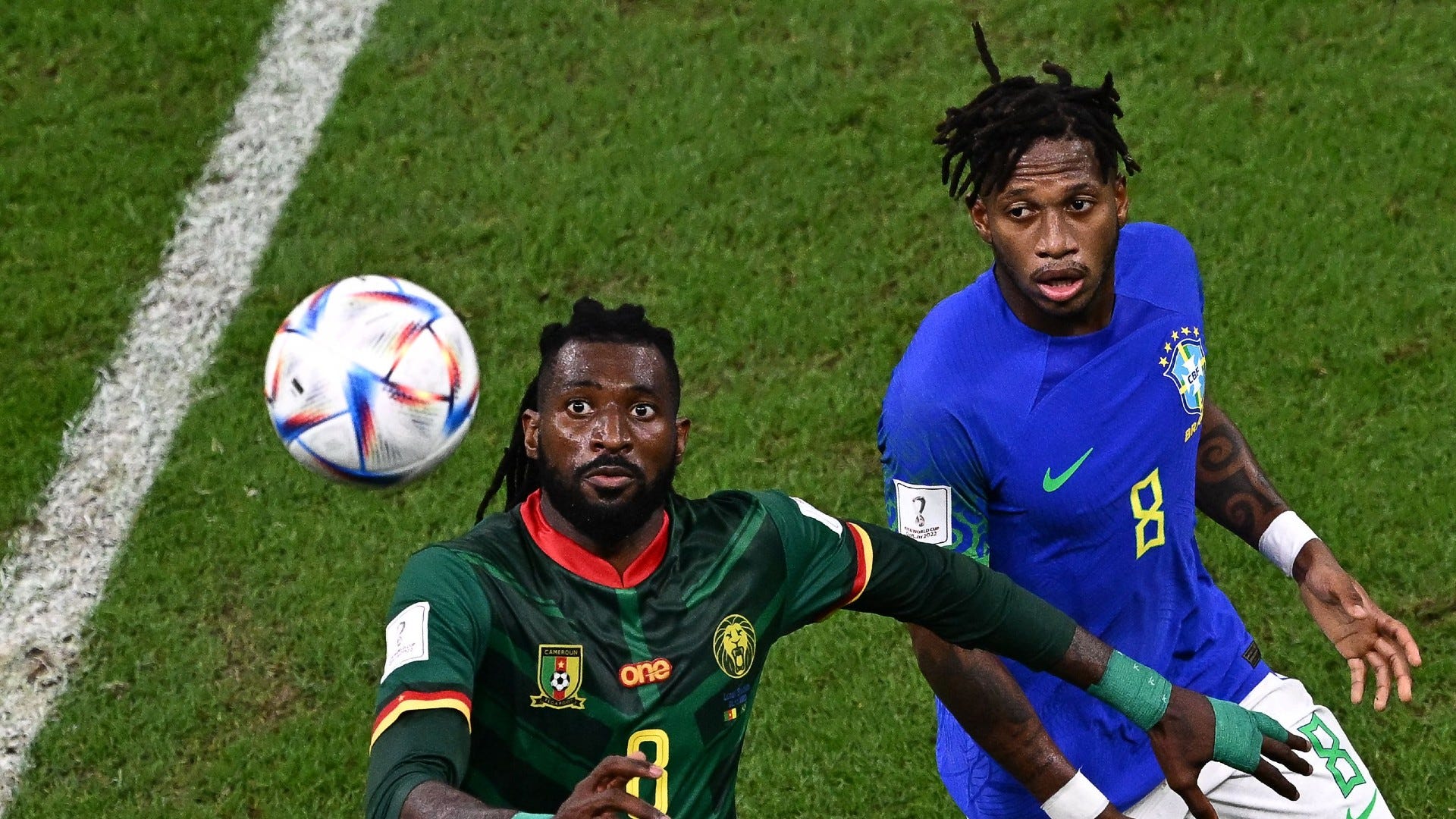 GettyMidfieldFabinho (6/10):Mopped up well in midfield and kept things ticking over with short, smart passes. Got through loads of work.Fred (6/10):Played some nice diagonals, including which set up a chance for Martinelli. Brazil lost a bit of energy when he went off. 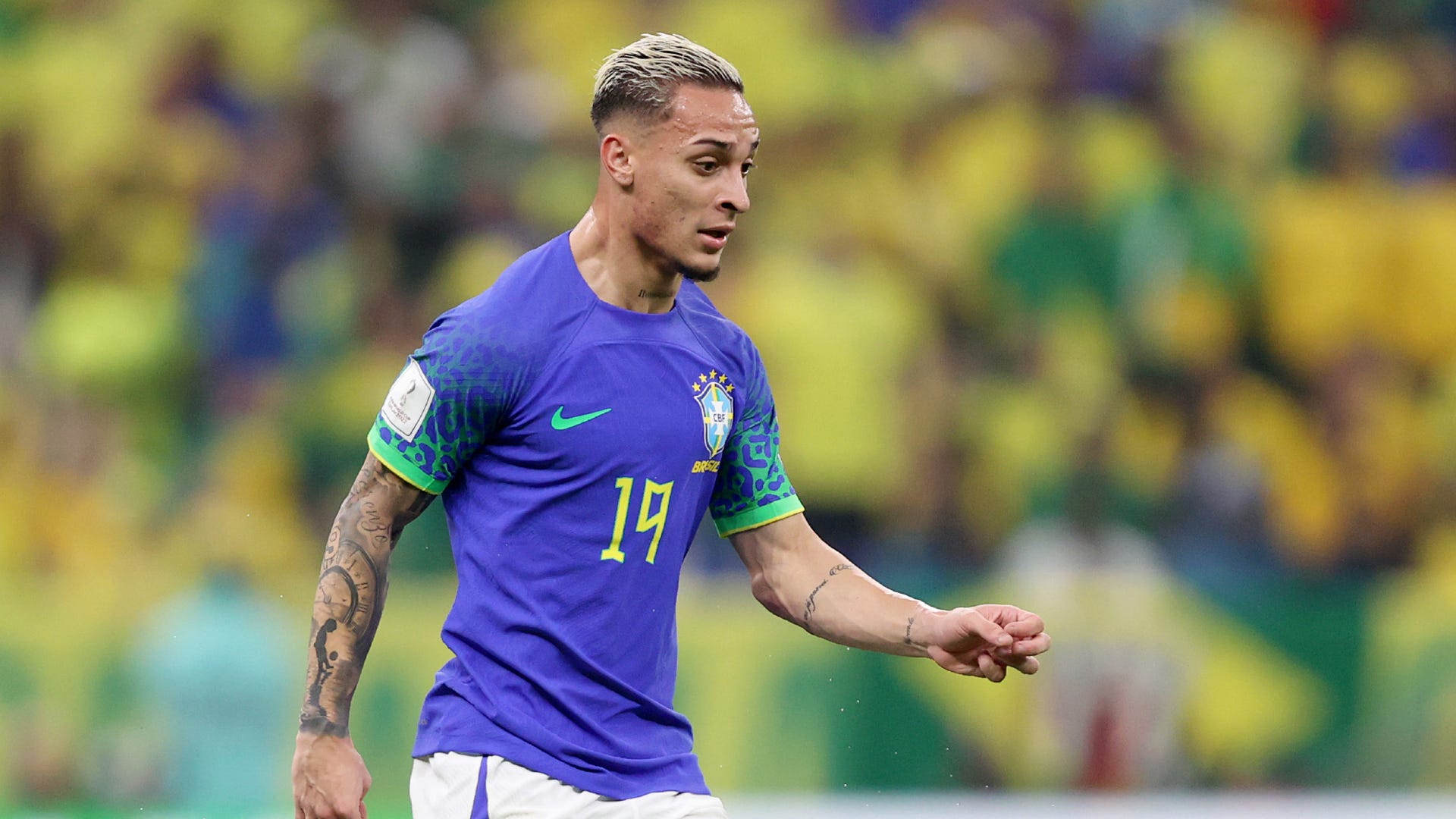 GettyAttackGabriel Martinelli (7/10):Lively and purposeful down the left, forcing two saves from Epassy in the first half. Tested the goalkeeper again after the break and his pace and purpose made him Brazil’s best and most dangerous attacker by far.Rodrygo (6/10):Close control and driving runs were a joy to watch at times, and forced Cameroon into desperate fouls. Replaced early in the second half.Antony (6/10):Started very brightly, with flicks and tricks galore. Held his width well and kept asking questions, but couldn’t find a telling end product.Gabriel Jesus (5/10):Minimal impact before being replaced by Pedro. Had a couple of half-chances, but will feel that this was an opportunity missed. 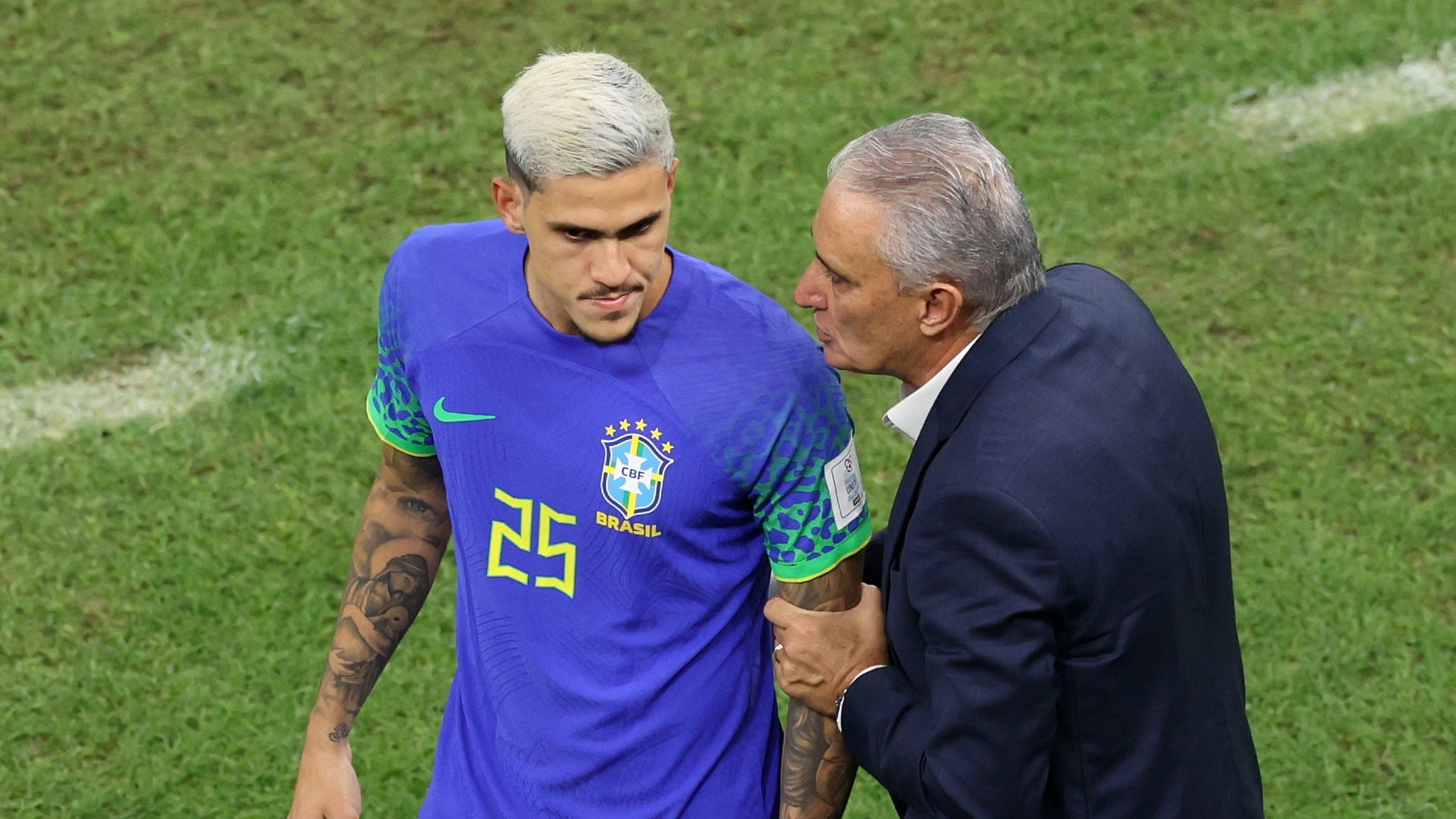 GettySubs & ManagerMarquinhos (6/10):On at left back, and didn’t look too flustered.Bruno Guimaraes (6/10):Carried the ball well and was denied a goal by a fine tackle by Wooh.Everton Ribeiro (5/10):Quiet after his introduction.Pedro (5/10):Didn’t offer much more than Jesus.Raphinha (6/10):Sharp dribble created a chance for Guimaraes.Tite (6/10):Made nine changes to his starting XI, but only a couple of the replacements have given him food for thought.